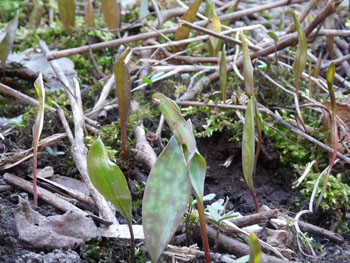 As the last of the snow melts from the forest hills and valleys, we are all welcoming every little sign that spring is here to stay! The buds of trout lilies poking up between the leaf litter in the forest, the early calls of frogs active in the wetlands once again, and spring bird songs heard in the early mornings. It’s these small things that seem so much more important this spring, with so much uncertainty in the world today, it’s nice to have the comfort of nature’s consistency.

Spring is surely here to stay when we begin to see the emergence of reptiles and amphibians from their winter hibernation sites. For some species, they are emerging from wetland locations where they have been frozen for the winter such as Wood Frogs who bury themselves into the mud where their breathing and heartbeat stop and as much as 65% of the water in their bodies turn to ice! Other species, like the Massasauga Rattlesnake, hibernate underground in crevices in bedrock, sphagnum swamps, tree root cavities and animal burrows where they can get below the frost line, but still remain above the water table. And Blanding’s Turtles who have found unfrozen shallow water in permanent bogs, fens, marshes, ponds, and channels in the winter months to bury into substrates. All of these species begin to emerge and can be found basking on warm sunny days with temperatures between 10 and 15 degrees Celsius. At this time of year, RiverStone staff are beginning to survey properties for snakes and turtles that may be found basking. Snakes and turtles found basking will be gaining energy for locating prey, mating, nesting, and evading predators.

Other signs of spring are the early calls of frogs from wetland habitats. The first frogs that begin calling include the threatened Western Chorus Frog (Canadian Shield population), Spring Peepers, and Wood Frogs. These calls are best heard on the first evenings of the year when temperatures are above 5 degrees Celsius with calm winds and no precipitation. Into May when evening temperatures reach 10 degrees Celsius, you will begin to hear American Toads, Leopard Frogs, Pickerel Frogs and Gray Treefrogs. The last frogs to call are Green Frogs, Mink Frogs, and Bullfrogs. Of course, many of these frogs can be heard calling throughout the summer season, and a few species even call again in the fall. To learn more about the individual calls, please see the “Peep, Quack, and Trill” blog post from May 2015. At this time of year RiverStone staff are beginning their first of three anuran calling surveys on properties with potential amphibian habitat.

Spring is a wonderful time of year – for nature enthusiasts and ecologists alike! If you are considering a development project that may require surveys for reptiles and amphibians, you don’t want to miss your window for the season! Signs of spring are all around us and we would be happy to work with you to make your dream project a reality!

Your email address will not be published. Required fields are marked *