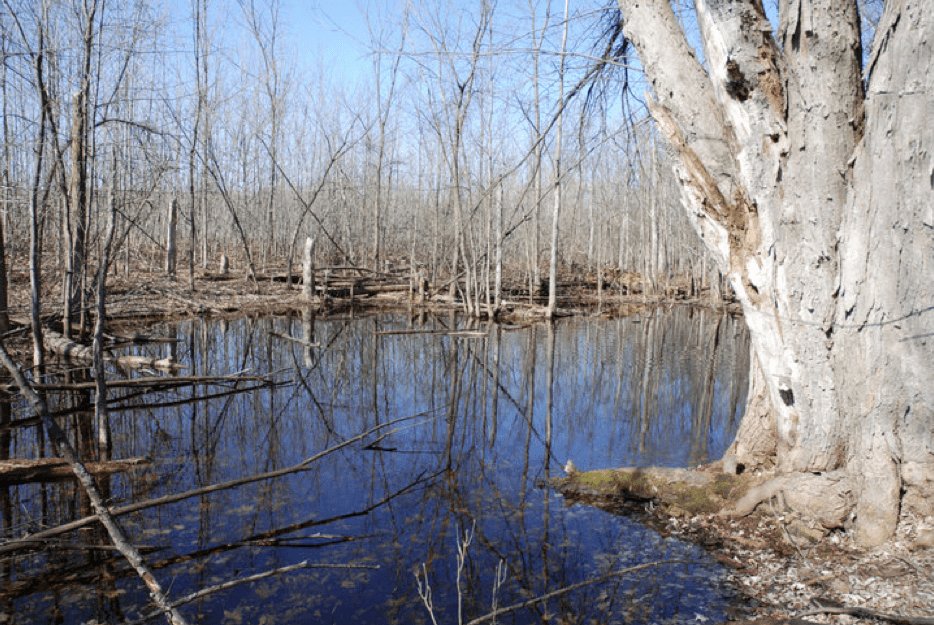 As winter starts to loosen its grip on the land, and the sun regains its strength, the once blanketed snow-scape begins to break up into a patch work of white polka dots with corridors of brown dormant vegetation beneath, eagerly awaiting the coming spring. The accumulated precipitation, formerly frozen, is now melting and beginning to flow through the land. This creates tiny temporary torrents that meander through forests returning to the nearby streams and lakes before drying up and leaving little evidence they were ever there at all.

However; not all of this water will complete such a journey. Here in the glaciated northeast, sections of hardwood and mixed forests often grow in substrates rich in clay. As the water is unable to penetrate into the clay, depressions and low laying areas retain water in pools throughout the forest. Named “vernal” or “ephemeral” pools in reference to their temporary nature, a vernal pool is destined to dry up and vanish as the summer progresses. Although their depth is generally 0.5 m to 1m the overall size is highly variable and can range from a couple meters across to over an acre. The shallow depth enables the process of annual drought which prevents fish populations from establishing and allows for a rich diversity of other species to thrive here, some of which only exist within these microhabitats.

Vernal pools are home to a wide variety of wildlife whose life cycles are completely dependent on these transient pools. The food chain in these tiny habitats is fueled largely by decaying leaves and plant material from the past growing season. Dominated by numerous species of invertebrates such as aquatic beetles, bugs, snails, claims, and crustaceans, they form a unique ecosystem. 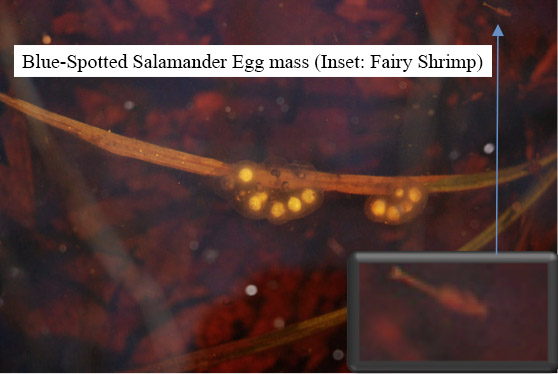 Fairy shrimp are small orangey/pink crustaceans and one of the most abundant inhabitants of vernal pools. Hatching from eggs that were laid the previous spring, they begin life as minuscule specks barely visible to the naked eye and grow to be about 1cm in length. Dense swarms in the thousands can occupy even the smallest pools and if you look closely into the water you can see them swimming on their backs, as they cruise around filtering out tiny particles to consume.

Aside from the invertebrates, 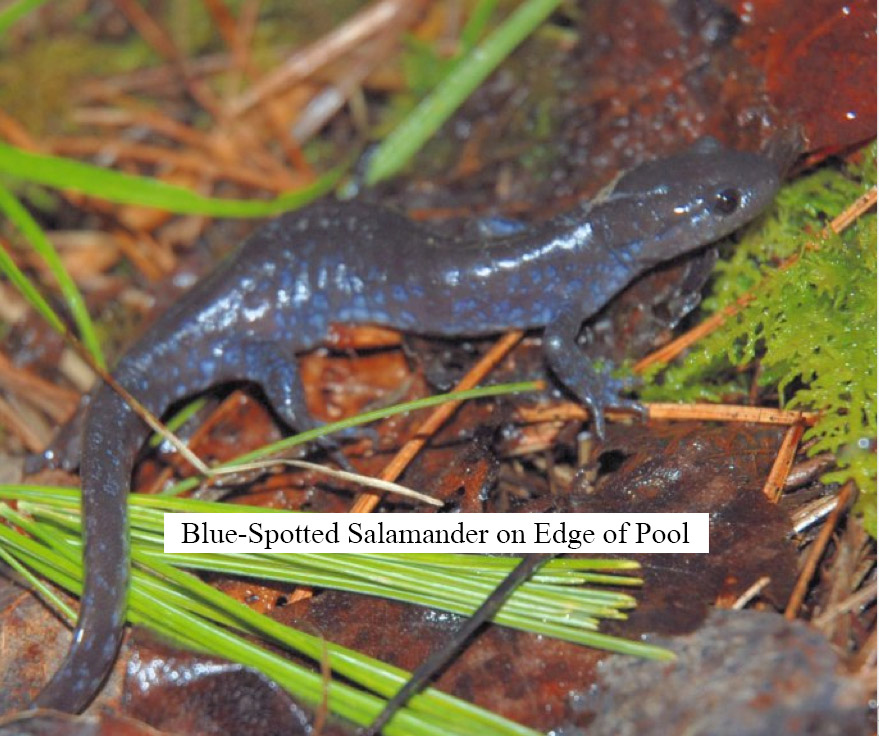 these pools play a key role in the life cycle of many species of amphibians. Several species of salamanders including: Blue-spotted, Jefferson’s, Small-mouth, Spotted, all spend the rest of the year in the forest and travel to these aquatics areas to perpetuate their species.

The Wood Frog, with its’ brown body and distinctive racoon eye mask, is another species solely dependent on these fishless bodies of water in order to reproduce. During the spring you may hear an odd cacophony of quacking emanating from the forest. This strange chorus, reminiscent of a choir of Mallard ducks, will tell you forest you’re walking in is home to one of these remarkable forest ponds.
This is a great time of year to witness the bounty of wildlife in forested vernal pools and observe the changes that take place here as the summer progresses. 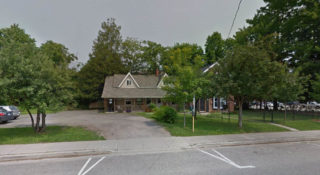