Peep, Quack, And Trill: Frogs And Toads And Their Sounds

Peep, Quack, And Trill: Frogs And Toads And Their Sounds

RiverStone would like to thank Joe Cebek, Fernando Vargas, and Glenn Cunnington for permission to use their photographs. 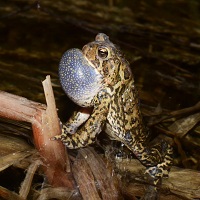 American Toads can be heard calling early in the spring until the beginning of summer. The call of an American Toad is a high-pitched long trill and is a common sound on spring evenings.
Did you know that the two large “warts” on an American Toad are special glands that make the toads taste terrible to potential predators! 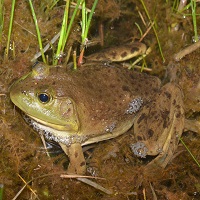 The call of the American Bullfrogs are a sure sign that the lazy days of July and August have arrived. The call of the Bullfrog is a deep resonating sound like a cow with a head cold, or others describe it as a “jug-o-rum”.
Did you know that the American Bullfrog is the largest frog in North America and can have a body that is up to 20 cm long and weigh over 2 lbs! Now that is a big frog! 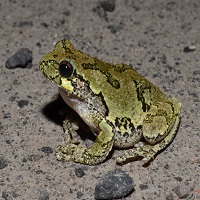 In late spring and early summer, Gray Treefrogs come out calling. The call of the Gray Treefrog is often mistaken for a bird song as it has a flute-like trill quality.
Did you know that Gray Treefrogs are able to change their colour to better blend into their environment! 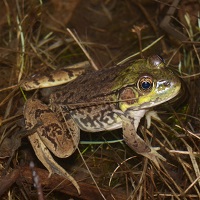 Green frogs are one of the true signs summer has arrived. The call of a Green Frog sounds like a plucked rubber band and is best described as a “glunk”. Often Green Frogs will call with a single loud “glunk!” followed by three fast quieter calls “glunk-glunk-glunk”.
Did you know that the large circles behind a Green Frog’s eyes are eardrums! 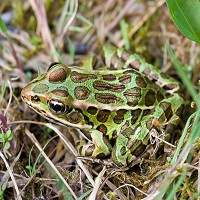 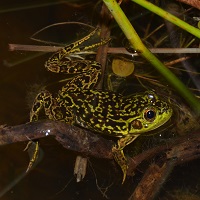 Mink Frogs are best listened for in June and July. Unlike other frogs, Mink frogs are best heard in early mornings just before dawn. Their calls consist of three or more quick short croaks or quacks that sound like a wooden mallet hitting a flat board.
Did you know that Mink Frogs are so named because they have a musky smell, similar to that of mink oil, that they emit when handled! 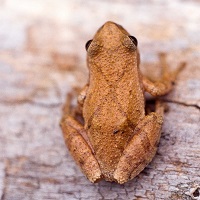 Spring Peepers begin calling soon after Wood Frogs, but can be heard calling well into the beginning of summer. These tiny frogs are usually no more than 2.5 cm (1 inch) in length but their loud, high-pitched “peeps” can seem deafening when Spring Peepers call in a large group.
Did you know that the call of a Spring Peeper can be heard from over 1 km away! 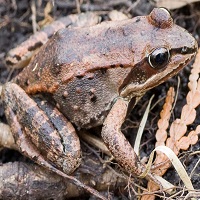 Wood frogs are the first of the frogs to call in the spring. Those lucky enough to make it to the cottage just after the snow has melted will be treated to the quack-like call of the wood frog.
Did you know that wood frogs freeze into solid frog-sickles in the winter and thaw out unharmed in the spring!

Your email address will not be published. Required fields are marked *